Foremilk/Hindmilk and a lot of confusion!

Thought I would share a really popular article from my personal blog.

Something that comes up a lot is the question of foremilk, hindmilk and how to ensure baby gets not too much of the first and enough of the latter. It’s really no surprise parents are confused as often Health Professionals give conflicting advice; ranging from only offer one side to ensure baby obtains hindmilk, through to timing feeds and giving a set amount of time on each side.
So what’s the deal?
Recently in the world

of breastfeeding support, there has been a movement to drop the terms “fore” and “hind milk”. Why? Because breasts only make one type of milk and using two names proves confusing to many.

The milk at the start of a feed is lower in fat and higher in lactose (sugar) than the milk nearer the end of a feed – therefore the first was labelled “fore”, the latter “hind”.

Science has since explained how and why.

As the breast fills, the increased volume of milk causes the sticky fat globules to adhere to the walls of the alveoli, and to each other. This means that when letdown occurs and the milk moves down the ducts, that which is expelled first is lower in fat – because it has moved down without large amounts of fat (that’s still stuck higher up).

As this milk is expelled, it allows the fat to become dislodged and then this can also begin moving towards the nipple. Thus the milk gradually becomes fattier as volume within the breast decreases. At the end of a feed when the breast is nearly empty, fat moves freely and levels are at their highest. So – the fuller the breast, the more lower fat milk will be released, the emptier the breast, the less fat adheres to the side and so milk is fattier earlier into the feed.

Given all of the above – which advice about feeding is best?

The fact is that there is no magical amount of time to spend at the breast as there are too many variables.

We know that whilst most women are capable of producing roughly the same mean amount over 24 hours, the amount held in the “initial store” varies from mum to mum (NOT related to breast size) . Babies also feed at different rates; some will be fast, effective “power feeders”, and others take their time as though savouring every mouthful.

Much like adults really, how often at a table is everyone ready for a round at exactly the same time?

So let’s look at how trying to apply the rules often suggested works out. 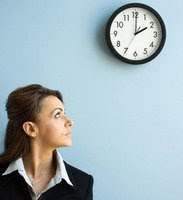 o her breast and he gets a nice hit of thirst quenching lower fat milk. As he feeds the fat levels start to increase and he’s just starting to feel satiated. Suddenly the mum (looking at the clock) realises baby has been feeding for the x minutes she was advised to feed for and swaps him over to the other breast. Baby is met with more thirst quenching but lower fat milk, which fills up his tummy – but due to the overall lower levels of fat, he’s hungry again half an hour later, possibly windy and very unsettled too as his body struggles to breakdown the higher levels of lactose.  Any unprocessed lactose can sit fermenting and symptoms can be very similar to those of a dairy or secondary lactose intolerance, colic or reflux.

Baby b in contrast, has quickly and effectively munched his way through mum’s smaller initial store and is ready for another big hit rather than the drip drip he is receiving. He’s had lots of fatty milk from the first breast and so quite enjoys more quenching milk, like a mid meal beverage. He might even go on to empty that one too…

So two babies have responded completely differently to the same course of action.

This time, instead of swapping at x minutes – this mum is concerned about sticking to one breast as advised to ensure baby gets hindmilk. This suits baby a, as this time he gets to finish his feed.

Baby b however is as mentioned, ready for more big guns – but instead is repeatedly coaxed back on to the first breast. Eventually baby gives up and falls asleep or remains unsettled, crying then windy and wants to feed again 30 minutes later.

See why there are no hard and fast rules?

The only way to know how long to feed your baby and on which breast is to watch the baby – they are the ones feeding, and they (believe it or not) know where the milk is at.

When baby is feeding she will let you know she has finished with that side by either falling asleep, or pulling away from the breast. This is likely to take roughly 10-20 minutes. Some babies do it in less and thrive, others slightly longer; but if baby is feeding for much longer ie 40 mins plus and then wants to do the same the other side or naps briefly and lightly before wanting to resume feeding (ie appearing unsatiated) it may be worth seeking support to ensure baby is feeding effectively.

Babies can also pull away from the breast shortly into a feed due to discomfort and one reason for this might be they need to burp! So if baby pulls off after a few minutes of effective feeding – winding before reoffering the same breast can be an idea as sometimes they will then continue happily feeding!

If they had actually finished with that side, when reoffered baby will perhaps feed for a moment or two (or refuse outright) before repeating the sign to let you know they’ve done ie sleeping or pulling away.

You can then offer the other side. Again there are no rules and if you need to run to the shops or drive to a baby group and baby is happy and content; you can always offer the other side when you get there, or when baby lets you know they are ready for more. That’s the convenience and ease of breastfeeding over having to prepare and use something instantly. Some babies will always have at least some of the second breast, if not all – others will refuse satiated from one – some will have two and some feeds and one at others!

As you get to know your baby you will recognise roughly how long they like to feed, whether they get windy and so on – until which side becomes as instinctive as lifting your top. Each mother and baby combination is unique but following your babies cues ensures you meet the needs of your baby.

Thank you so much for this article – months of confusion has been abated, and I can carry on doing what I’m doing without stressing that I’m getting it wrong. Such a relief to know that following my instinct is the best course of action after all!

Hi great information and I absolutely agree with all your comments it all makes perfect sense. My question is for feeding twins, I am ebf my twins I try to tandem feed at every feed except if I’m out, so both breasts are emptied and I have no chance to offer the other breast to the babies. Does this mean that they are not getting what they need of the second round of fore milk? Not much I can do about it really as I need to tandem feed in order to have some time to get things done and play with my older daughter.