Last night I posted this picture on our Facebook wall asking “Why does this baby’s tongue look like this?” 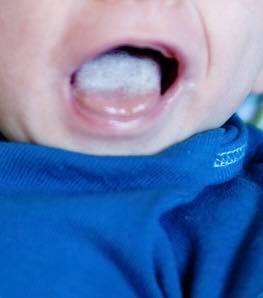 I see many similar tongues in clinic, and alongside breastfeeding problems like damaged nipples or pain, they’re typically diagnosed and treated as thrush.

Well done all the people who guessed this was simply a milky tongue, in a baby who has shallow attachment on the breast or bottle.  It doesn’t tell us baby has a tie, or why they’re not attaching effectively, just that they’re not.

When baby attaches effectively and deeply when feeding, the breast fills the mouth entirely sweeping milk and dead skin cells from the area.  When they’re not, it doesn’t.

Signs it’s more likely to be a “milky tongue”:

Candida is present naturally in many asymptomatic newborns (and adults).  An old 1977 paper states that 82% of 140 babies tested were colonised at 4 weeks, thereafter declining slowly to 50% at 1 year.  28 were colonised with the C. albicans (the strain that accounts for about 90% of human yeast infections) at 4 weeks of life and only 3 developed clinical thrush.

If mum has pain it must be thrush right?

Diagnosing thrush in mothers, is more even more complex.  Often guidance is to swab mothers, however a  2014 Statement by The National Infant Feeding Network says:

Wendy Jones PhD, MRPharmS and the The Breastfeeding Network (2009) have developed a tool mothers can use to help explore other causes of their pain, and this is an excellent article highlighting the problems that may be mis-diagnosed as thrush.

We get asked a lot for recommendations for independent providers that treat tongue tie in other parts of the country, so I thought some discussion around helpful things to ask when deciding who to use Read more…