Not just a “typical reflux baby”

Louis is Lucie’s third son and was delivered by planned c-section. She was warned this may make him more unsettled than other babies.

Lucie was also told Louis had a small tongue tie, but that this would not have any impact.

Louis was restless from the start, sleeping little, feeding often and wriggling, squirming and crying while he fed. He was also sick after most feeds – to the extent that Lucie took to covering them both with a bath towel to save changing and washing clothes constantly.

Lucie saw both her GP and health visitor with Louis over a period of several months. He was described as, “a typical reflux baby,” and prescribed Gaviscon. Lucie was told he would probably grow out of it. Because he was gaining weight the NHS health professionals didn’t seem concerned.

But knowing something wasn’t right, Lucie turned to the internet. She followed Charlotte’s blog, Analytical Armadillo, and found some information which led her to believe Louis had an underlying problem that might be causing the reflux.

Lucie said: “After trying an osteopath, raising the mattress and all the usual tips given for reflux, I turned in desperation to the internet and found an article by Milk Matters. I contacted Charlotte on a Wednesday and she came over two days later. Even though it was a bank holiday, Charlotte booked us in for a further appointment with Milk’s independent lactation consultant and tongue tie expert on the Monday.

“After tasking a detailed medical history, not just about Louis, but about me too. I was given advice about what his behaviour was telling them, how best to comfort him and offered a frenotomy (release of tongue tie).

“The procedure took only a few minutes and Louis fed straight after without any distress.

“The effect was amazing. He slept twelve hours that night and is now sleeping well during the day. We have no hysterical screaming fits at all. I can’t believe how we managed for so long.”

The Story in Lucie’s own words:

Louie was born on the September 2010 by elective c section at 37 weeks, weighing 7lb 15oz.  I was warned of several potential problems at delivering the baby so early, such as-breathing issues, sleepy baby, jaundice etc, but because I had a T cut section with my 2nd son I was not able to go further than 37 weeks.  I had steroids to mature Louie’s lungs at 36 weeks.

There were no issues at all when he was born, the c section was lovely and calm, he had skin to skin in theatre and other than being cold at birth he was in great condition.  He was very sleepy after the birth but I was told to wake him up to feed every 3 hours.  He had jaundice until he was 7 weeks old, this was checked by a paediatrician and I was told breast fed babies can have jaundice until 16 weeks.

In the early days Louie was a frequent but very quick feeder, he fed well for a few minutes but then fell asleep at the breast, I put this down to him being a 37 week baby who was sleep and assumed he would ‘wake up’ and be more alert by his official due date.  Louie co slept and partially shared my bed from the beginning.

Louie did ‘wake up’ but it soon became apparent he was not a very happy/settled baby, feeding became a nightmare.  I have fed 2 other children, exclusively for 6 months and continued up to a year and never have experienced anything like how Louie fed.  I became very sore, not bleeding nipples but a terrible burning sensation that lasted throughout the whole feed, I thought I may have thrush but this was never diagnosed and I think I just got used to the feeling.  I also put it down to him feeding every hour, day and night (my nipples never had chance to recover!) I never really questioned how often he fed, although I was told to try and push him further on or offer him formula top ups but I didn’t because I’ve always taken the attitude that in much the same way as I don’t feed every 4 hours then neither do babies and again I kept thinking that it was because he was born early and things would improve.

Louie consistently gained weight (I was even told he was obese and I should formula feed him as this would mean I could regulate how much he fed, which is utter rubbish as he was born on the 25th centile and is still on it now) although he never had a big growth spurt as my others have.

Not only was Louie a frequent feeder but he was also a distressed feeder, he would wriggle, squirm, writhe, arch his back and fight me until finally becoming so distressed and hysterical that I had to stop feeding  and cuddle him until he calmed down – he was described as a “typical reflux baby”.  it was just a case of ‘riding it out’ as unfortunately nothing I or anyone else did could soothe him; after he had calmed down he would feed ok, still wriggly and almost uncomfortable but he would take some milk.

Afterwards he would be sick, (I had to have a bath towel to cover him and me) and full of wind.  At 7 months the  most he had ever slept on a night is 3 hours and this was very rare.  Throughout the night we had to cope with several screaming fits and again had to ride these out by cuddling him and swaddling him.  Louie spent much of the day crying and was very rarely content.  We tried a sling, Cranial Osteopathy, tilted mattress, infant gaviscon etc but nothing worked.

Louie refused all bottles (I tried them all) and dummies!  He could not bear them in his mouth and got very distressed, he would not even tolerate them touching his mouth.  He also refused a spoon completely, and although he appeared interested in food – seemed to struggle with it and so quickly discarded it.  Any that was swallowed was almost immediately vomited back!

A health Visitor told me she thought he may be tongue tied,  but then told me not to worry as it clearly did not bother him and he had always gained weight.   A doctor practically laughed me out of the surgery and dismissed me straight away, but the more I read about it the more everything just fell into place,  so I decided it was important to know for certain as then I could make an informed decision.

Charlie visited  on the Friday and confirmed there were significant indicators of tongue tie including visual shaping of the tongue.  After a thorough discussion Charlotte arranged tongue tie division privately for us,  and the (what we discovered to be) 85-90% tie was snipped by the Monday! 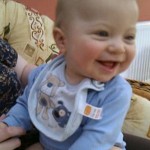 The procedure took seconds, bled only a few drops and immediately after Louie fed calmly and was still!!

The difference has been incredible and quite literally life changing. The first night he slept from 7pm until 6am (unheard of!!) and although he now, one week later occasionally wakes up, it is literally for a comfort feed.  He is sleeping pounds better during the day-3 naps of between 1 & 2 hours, and no screaming/hysterical fits at all.  Feeding is no longer a chore that I have to just ‘do’ it is now much more pleasurable for us both.  Louie is having Cranial Osteopathy tomorrow and I hope he will continue to settle down and become much more contented!

Feeding is 100% better with Louie now for both of us!  I  can’t believe how we managed for so long.  He is eating and enjoying lumpy foods  without any bother, he hasn’t been sick at all since the division and milk feeds are calm and pleasurable.  He is sleeping pounds better both day and night and I would now describe him as happy & content..the difference is amazing, I can’t thank Charlie enough and will recommend Milk Matters to anyone who is struggling.