Kate and Solo Chandan, from Rounday in Leeds, turned to Milk Matters after their first child, Louis, lost 13% of his birth weight in the first few days.

Kate says: “Charlotte gave me the courage and confidence to listen to and believe in my maternal instincts. Six months on I can honestly say I love breastfeeding – if you’d told me that was possible four months ago I wouldn’t have believed you.

“We have also turned to Charlotte for support on settling Louis, his sleep and other feeding queries and she has always been a source of knowledge and information.”

After it became apparent Louis was losing weight Kate and Solo had been advised to supplement Louis’ breastfeeds with formula, but didn’t want to go down that route. Charlotte went to visit them and assessed Louis as well as observing a feed. She showed us the signs that Louis had a disorganised suck and indicators that the long birth had caused some discomfort too.

Charlotte showed us positions that could help with the specific problems Louis was having, and reduce the pain I was experiencing when feeding; she explained more about breastmilk production and how to protect my supply until Louis was feeding well (otherwise it can drop rapidly).  Charlotte showed us how we could tell Louis was actually drinking milk, rather than just looking at if he appeared to be latched ok, and also covered how to give him extra breast milk as required without using a bottle.

She also explained that Louis’ symptoms might naturally heal as he grew and recovered from the birth and encouraged us to keep in touch.

Things improved after the first visit, with Louis feeding much better and starting to gain weight, but began to stagnate after around three weeks.

At her second visit Charlotte confirmed that Louis showed signs of having a tongue tie which could be the problem with his feeding. She arranged to have the tie snipped and this made an immediate difference to him.

“We’ve never looked back since Louis’ tongue tie was snipped. While that made a difference to his feeding, Charlotte also helped us with coping strategies to ensure he was getting enough milk and was always on hand to offer advice and support over the phone, something we needed frequently over the first few months,” says Kate.

But Milk doesn’t only support mums on their parenting journey, they also try to show dads a way to be involved, even if baby is breastfed. Louis’ dad, Solo, also benefitted from Milk’s involvement.

“From the moment of Charlotte’s arrival in our home I felt relief,” says Solo.

“We felt so let down by the NHS, from midwives to health visitor thatCharlotte’s straight-talking manner and wealth of information gave me confidence that we could achieve what we wanted for our son.

“Charlotte immediately showed us how our son was communicating his discomfort and that it stemmed from the left side of his body, meaning holding or laying him in certain positions was extremely uncomfortable for him.

“We discussed options for helping relieve his discomfort, one of which was an osteopath who specialises in treating babies alongside Milk Matters. We saw them the next day and noted immediate improvement in some of the signs we had learnt to recognise the day before.

“Another couple of sessions resulted in relief for Louis and major changes in his sleep. The second and most important thing was his tongue tie, not even checked by the hospital, Louis was enduring colic of epic proportions.  Charlotte wrote a report for a fellow lactation consultant who specialised in tongue ties, it outlined so many variables till it was clear Louis did in fact have one.

“The next steps were clear, the tongue needed to be cut professionally, which Charlotte organised. It was quick and before too many Mummy tears were shed, Louis was feeding.

“The results have been brilliant, the most significant being our son is still breast fed! If it wasn’t for the support and professionalism of Charlotte we would have both either lost the plot or given up. I’m so glad we didn’t!”

Kate’s Story (in her own words)

I first met Charlotte when my little boy was 5 days old. Since leaving hospital 2 days before I had been trying to feed him,  which meant lengthy times on the breast up to 3 or  4 hours, and that seemed the only place he wouldn’t cry. I was very distraught, my milk hadn’t come in, it was painful and I didn’t know what I was doing wrong.

I rang Charlotte who came that day, and spent time with me working through some more comfortable positions, showing us how to identify active colostrum/milk transfer and reassuring my that with the stressful delivery we had experienced may delay milk slightly, but that it was “coming in”, which gave me the confidence to carry on. 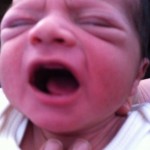 My son had been born by emergency casarean and was very bruised at birth; Charlotte noted his head and tongue deviated from typical and we discussed the potential of a tongue tie.  As his birth trauma could be a factor we arranged to see a local osteopath and have a few days “babymooning”.

That afternoon the midwives came and we discovered my son had lost 13% of his birth weight.  As he had been overdue and I had received IV fluids (which can inflate birthweight) and we were confident he was now taking milk; we were adamant with the midwives that we didn’t want to give formula.

Luckily he then began to gain weight well (he was re-weighed the next day  and had gained), and after the first osteopathy session we noticed his head and tongue were significantly improved.

Feeding although better was still quite painful at times (other times it seemed fine) and feed duration had reduced significantly but was still often 1-2 hours per feed.  The osteopath felt there was more to be relieved and so after further discussion and thought, we decided to wait, have another session and see how things went.  After the third session we were advised that he had released as much as he could, but elevation (despite being very much improved) was still restricted.  At around the same time his weight plateud and as I had been in touch with Charlotte throughout, aranged for her to come for another visit.

My son was also very windy and unsettled, he would squirm, grunt, cry and wake as soon as he was put down.  He would arch his back, pull up his knees and twist in distress.  Although he stooled very frequently, they were often green, explosive and at times mucousy.

Charlotte confirmed there were still significant indicators of tongue tie and so we decided to go  for a private referral via Milk Matters to get it divided when he was around 4 weeks old.  It was extremely straight forward and quick, and the difference in feeding immediately after was staggering – it didn’t hurt!

We immediately had a further osteopathy session as we were advised often further tension can be relieved once the tie has been released – and there was a dramatic improvement again which continued over the next couple of weeks.

He was a totally different baby!  He not only began sleeping better, but was actually laid happy if he woke rather than clamouring for the breast or to suck on a finger. The wind, colic and reflux vanished, stools became consistently rich mustard yellow and he is nw 9 weeks old and flourishing!

It has been a long, difficult and intense process but with the support of Charlotte we gave come out the other side. Breast feeding is something I wanted to do, and Charlotte gave me the support and guidance and strength to carry on when faced with everyone suggesting the easy option of formula!!

Not only has Charlotte supported my breastfeeding requirements, she is always on hand evenings/weekends if I need her and also offers support on other things such as sleeping habits etc.  Something the NHS has never been able to do, it has made me feel let down by the service they provide as there is no support available.

Charlotte is extremely passionate about her work and I cannot thank her enough for the support she has provided us with.